Librsvg 2.42.0 came out with a rather major performance regression compared to 2.40.20: SVGs with many transform attributes would slow it down. It was fixed in 2.42.1. We changed from using a parser that would recompile regexes each time it was called, to one that does simple string-based matching and parsing.

When I rewrote librsvg's parser for the transform attribute from C to Rust, I was just learning about writing parsers in Rust. I chose lalrpop, an excellent, Yacc-like parser generator for Rust. It generates big, fast parsers, like what you would need for a compiler — but it compiles the tokenizer's regexes each time you call the parser. This is not a problem for a compiler, where you basically call the parser only once, but in librsvg, we may call it thousands of times for an SVG file with thousands of objects with transform attributes.

So, for 2.42.1 I rewrote that parser using rust-cssparser. This is what Servo uses to parse CSS data; it's a simple tokenizer with an API that knows about CSS's particular constructs. This is exactly the kind of data that librsvg cares about. Today all of librsvg's internal parsers work using rust-cssparser, or they are so simple that they can be done with Rust's normal functions to split strings and such.

Librsvg ships with rsvg-convert, a command-line utility that can render an SVG file and write the output to a PNG. While it would be possible to get timings for SVG rendering by timing how long rsvg-convert takes to run, it's a bit clunky for that. The process startup adds noise to the timings, and it only handles one file at a time.

So, I've written rsvg-bench, a small utility to get timings out of librsvg. I wanted a tool that:

Currently rsvg-bench supports all of that. 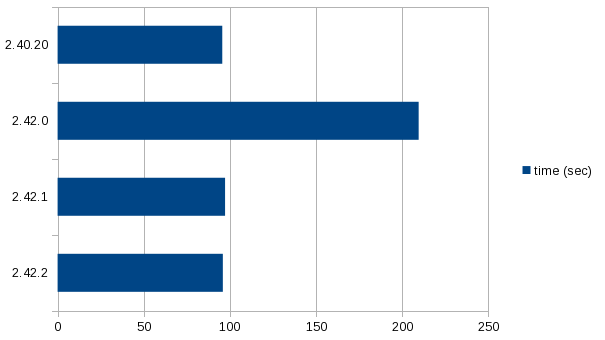 So, 2.42.0 was over twice as slow as the C-only version, due to the parsing problems. But now, 2.42.2 is practically just as fast as the C only version. What made this possible?

I have started taking profiles of rsvg-bench runs with sysprof, and there are some improvements worth making. Expect news soon!