Some important changes are afoot in librsvg.

Some days ago, Dunja Lalic rewrote the continuous integration scripts to be much faster. A complete pipeline used to take about 90 minutes to run, now it takes about 15 minutes on average. 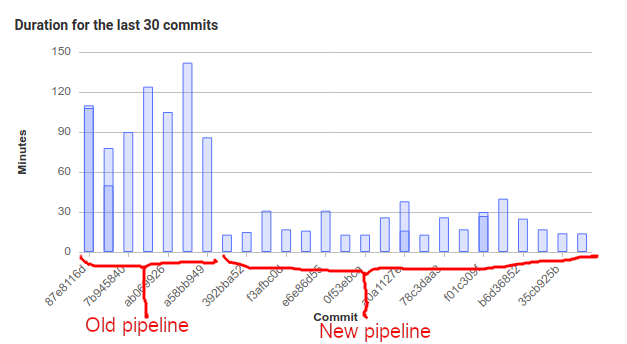 The description of changes is interesting. The idea is to make tests fail as fast as possible, close to the beginning of the pipeline. To speed up the whole pipeline, Dunja did the following:

Beteen Sven Neumann, Dunja Lalic, and myself we have finally ported the test suite to Rust: all of librsvg's tests are now in Rust, except for the C API tests. We had to do a few things:

The most complicated thing to port was the reference tests. These are the most important ones; each test loads an SVG document, renders it, and compares the result to a reference PNG image. There are some complications in the tests; they have to create a special configuration for Fontconfig and Pango, so as to have reproducible font rendering. The pango-rs bindings do not cover this part of Pango, so we had to do some things by hand.

Anyway, the tests are now in Rust. One nice thing is that now the tests run automatically in parallel, across all CPU cores, so we save on total testing time.

We want to be able to publish librsvg in crates.io as a normal crate; this implies being able to compile, test, and publish entirely from Cargo. The compilation and testing part is done.

Now, we have to reorganize the code so it can be published to crates.io. Librsvg comes in three parts, rsvg_internals with the implementation of the library, librsvg with the traditional C API, and librsvg_crate with the Rust API. However, to publish the Rust API to crates.io, it would be more convenient to have a single crate instead of one with the internals and one with the API.

The next step is thus to reorganize the code:

What remains to be ported to Rust?

Only two things, which amount to less than 900 lines of C code: