"Themes in GNOME" is a complicated topic in technical and social terms. Technically there are a lot of incomplete moving parts; socially there is a lot of missing documentation to be written, a lot of miscommunication and mismatched expectations.

The following is a brief and incomplete, but hopefully encouraging, summary of the status of themes in GNOME. I want to give you an overall picture of the status of things, and more importantly, an idea of how you can help. This is not a problem that can be solved by a small team of platform developers.

I wish to thank Alexander Mikhaylenko for providing most of the knowledge in this post.

First, I urge you to read Cassidy James Blaede's comprehensive "The Need for a FreeDesktop Dark Style Preference". That gives an excellent, well-researched introduction to the "dark style" problem, the status quo on other platforms, and exploratory plans for GNOME and Elementary from 2019.

Go ahead, read it. It's very good.

There is also a GUADEC talk about Cassidy's research if you prefer to watch a video.

Two key take-aways from this: First, about this being a preference, not a system-enforced setting:

I’m explicitly using the language “Dark Style Preference” for a reason! As you’ll read further on, it’s important that this is treated as a user “preference,” not an explicit “mode” or strictly-enforced “setting.” It’s also not a “theme” in the sense that it just swaps out some assets, but is a way for the OS to support a user expressing a preference, and apps to respond to that preference.

Second, about the accessibility implications:

Clearly there’s an accessibility and usability angle here. And as with other accessibility efforts, it’s important to not relegate a dark style preference to a buried “Universal Access” or “Accessibility” feature, as that makes it less discoverable, less tested, and less likely to be used by folks who could greatly benefit, but don’t consider themselves “disabled.”

Libadwaita and the rest of the ecosystem

Read the libadwaita roadmap; it is very short, but links to very interesting issues on gitlab.

For example, this merge request is for an API to query the dark style and high-contrast preferences. It has links to pending work in other parts of the platform: libhandy, gsettings schemas, portals so that containerized applications can query those preferences.

As far as I understand it, applications that just use GTK3 or libhandy can opt in to supporting the dark style preference — it is opt-in because doing that unconditionally in GTK/libhandy right now would break existing applications.. If your app uses libadwaita, it is assumed that you have opted into supporting that preference, since libadwaita's widgets already make that assumption, and it is not API-stable yet — so it can make that assumption from the beginning.

There is discussion of the accessibility implications in the design mockups.

In GNOME we have three implementations of CSS:

None of those implementations supports @media queries nor custom properties with var(). That is, unlike in the web platform, GNOME applications cannot have this in their CSS:

Or even declaring colors in a civilized fashion:

Or combining the two:

Boom. I think this would remove some workarounds we have right now:

They are currently implemented with GTK's @define-color, which is not ideal if the colors have to trickle down from GTK to SVG icons, since librsvg doesn't do @define-color - it would rather have var() instead.

Look for @accent_color, @accent_bg_color, @warning_color, etc. in the default stylesheet, or better yet, write documentation! 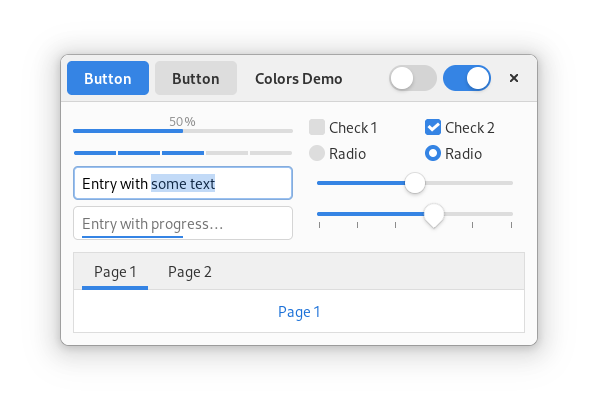 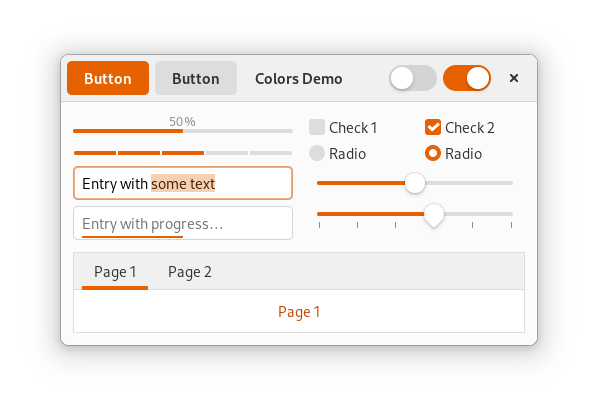 Again, your app's custom stylesheet for its custom widgets can use the colors defined through @define-color from the system's stylesheet.

You will be able to do this after it gets merged into the main branch, e.g. recolor everything to sepia: 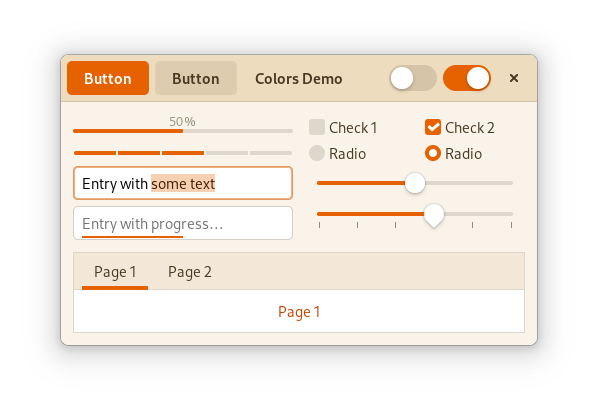 Of course shade() is not web-platform CSS, either. We could keep it, or redo it by implementing calc() function for color values.

Currently GTK takes some defined colors and creates a chunk of CSS to inject into SVG for icons. This has some problems.

There is also some discussion about standardizing recolorable icons across desktop environments.

How you can help

Implement support for @media queries in our three CSS implementations (librsvg, gnome-shell, GTK). Decide how CSS media features like prefers-color-scheme, prefers-contrast, inverted-colors should interact with the GNOME's themes and accessibility, and decide if we should use them for familiarity with the web platform, or if we need media features with different names.

Implement support for CSS custom properties - var() in our three CSS implementations. Decide if we should replace the current @define-color with that (note that @define-color is only in GTK, but not in librsvg or gnome-shell).

See the libadwaita roadmap and help out!

Port applications to use the proposed APIs for querying the dark style preference. There are a bunch of hacky ways of doing it right now; they need to be migrated to the new system.

Personally I would love help with finishing to port gnome-shell's styles to Rust - this is part of unifying librsvg's and gnome-shell's CSS machinery.