Ferrocement is a building technique that allows for very flexible forms to be made with concrete. You can make vaults, walls, round tanks or differently-shaped ones, cisterns...

For a normal concrete pour, you need some kind of formwork that is difficult to build and awkward to remove later. Ferrocement generally lets you avoid most or all of the formwork, as what is built can support itself even as the concrete is curing.

I am not an expert in ferrocement, but I've had had enough things in my house made with this technique that I can give a little introduction.

Building a bridge - a little example

For this example, we'll build a small bridge to cross a ditch in the ground - a Permaculture-style swale for water catchment. The bridge is not designed to sustain big loads, or for a great span; it is just a little example. 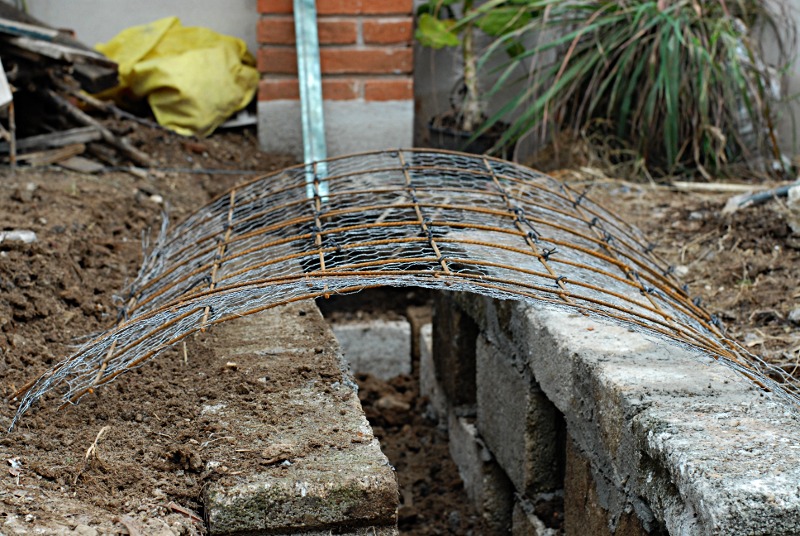 You form a rebar mesh into the shape you want, overlay it with hexagonal wire mesh, and tie it all together with wire. The more taut the hexagonal mesh, the better. You can make the wire ties with pliers, or with an L-shaped tool that builders use to twist wire elegantly. 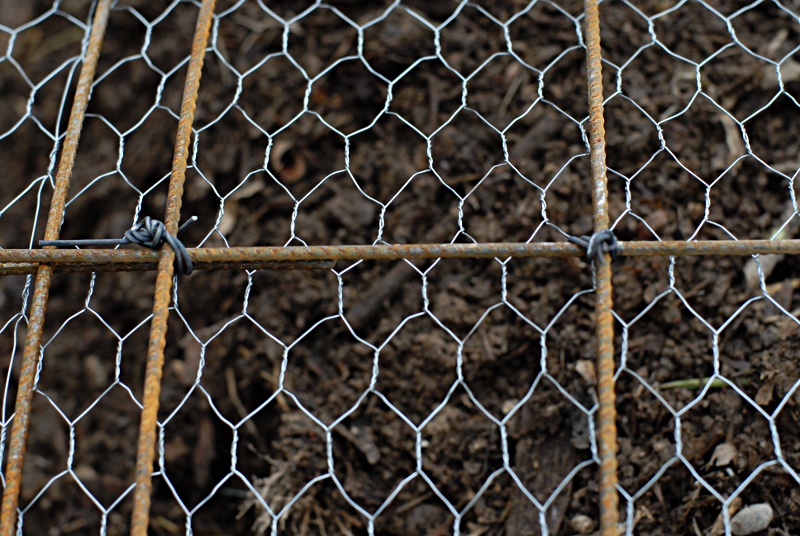 Pour a little concrete base on each end of the bridge, on which to seat the wire mesh. The basic recipe is: 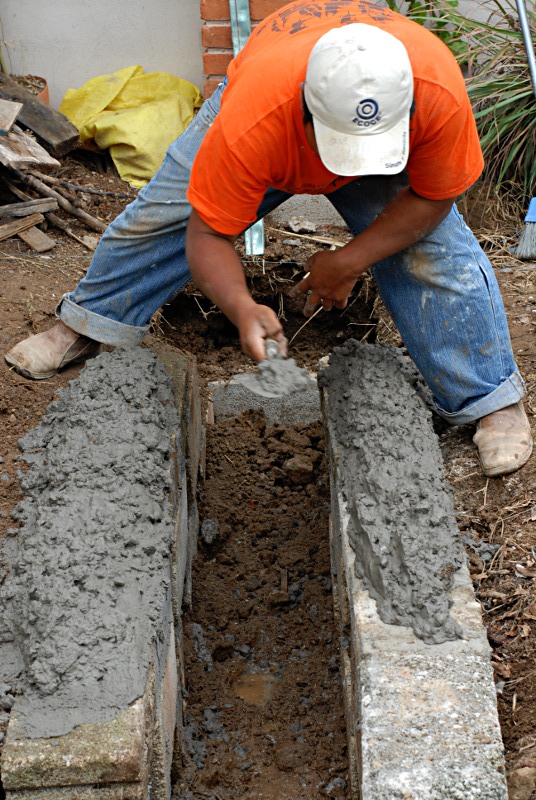 Put the mesh over the concrete bases, seating it reasonably well. 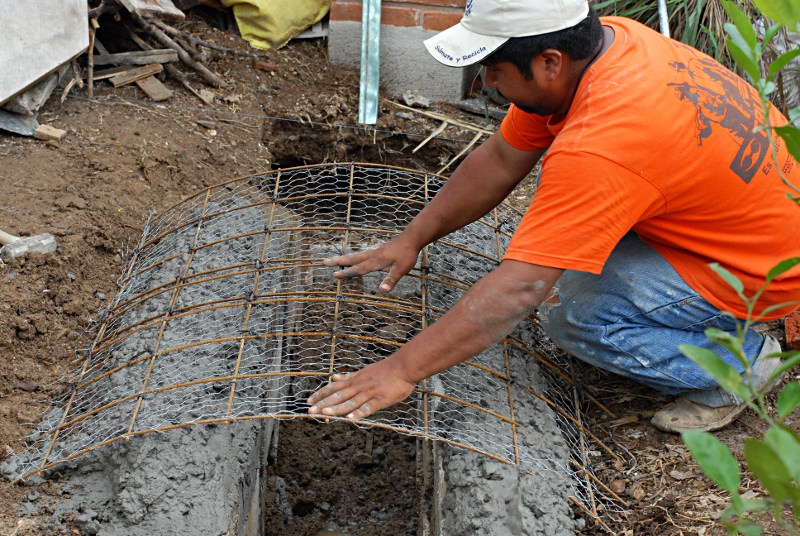 Then you start pouring concrete over the bridge's mesh. Do the lower ends first, and climb up to the center. You have to spread the concrete mixture with a trowel, but without tamping it down - that would cause it to spill through the mesh. Something will spill, but it is generally only the most liquid part of the mixture, and not the majority of the material that clings to the gravel. 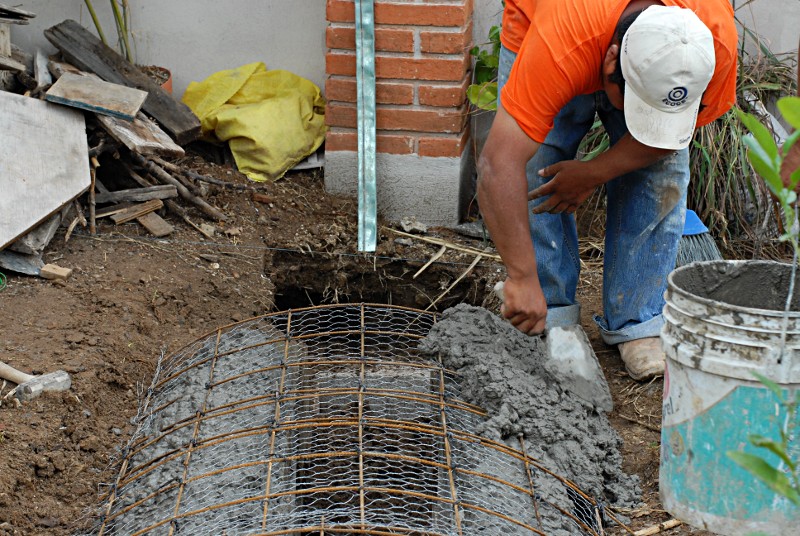 Continue up. The mixture at the bottom holds what goes at the top, and you go like that until you reach the center. 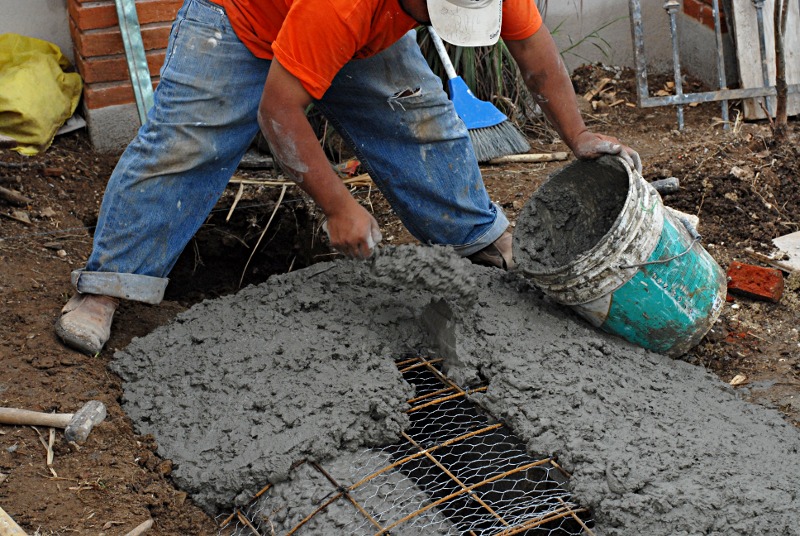 The next day, the bridge is strong enough to walk on. The concrete is not fully cured yet, but it is strong enough. Then you can coat it and smooth it with a flat trowel to refine the surface. 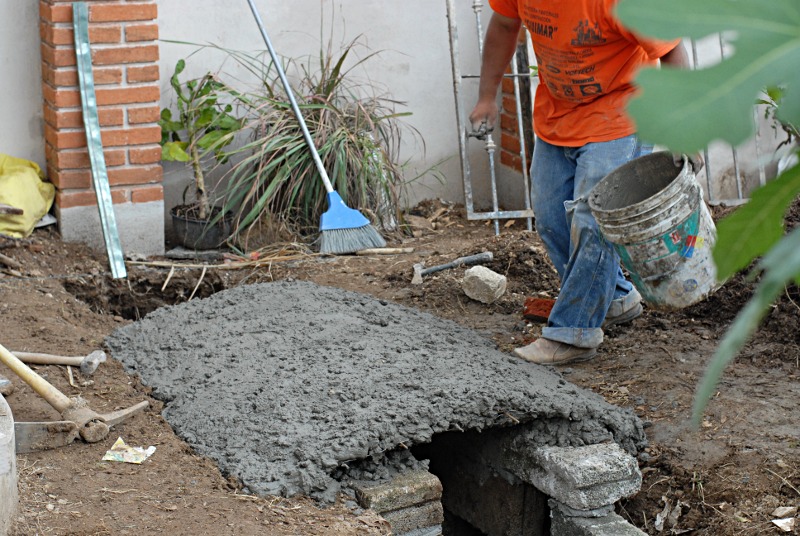 Some time ago, Christopher Alexander's book A Pattern Language inspired my wife and myself to expand our house, and to build concrete vaults instead of flat roofs. Vaults are easy to build, don't require expensive and wasteful formwork, drain automatically, give you tall ceilings, and make rooms quite special.

It was then that I found Flying Concrete, a fantastic web page of ferrocement construction, especially vaulted structures. The idea is to build catenary vaults. A catenary is the curve that results from hanging a chain from two points; when you turn it upside down, you get the most efficient vault possible. The church of the Sagrada Familia, in Barcelona, by Antoni Gaudí, is a very tall structure built entirely out of catenary vaults and arches. 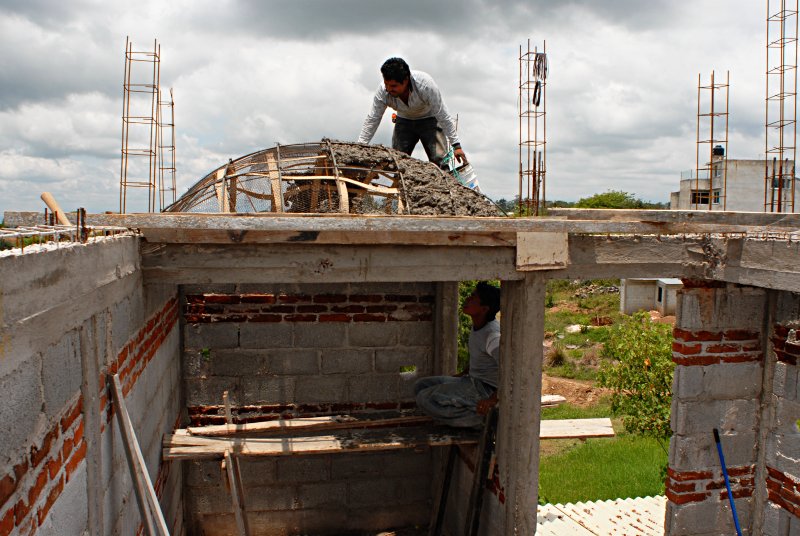 Ignore the light brown strips under the structure; originally I wanted to use flexible wooden strips instead of rebar, but got MDF by accident - and only later discovered that it got unusably soft when wet. Other than that, the structure of the vault is the same as for the little bridge: rebar and tied wire mesh.

First you can lay on a thin layer of concrete, let it harden a bit, and then lay a thicker layer on top of that. This prevents the mesh from sagging too much from the initial weight. 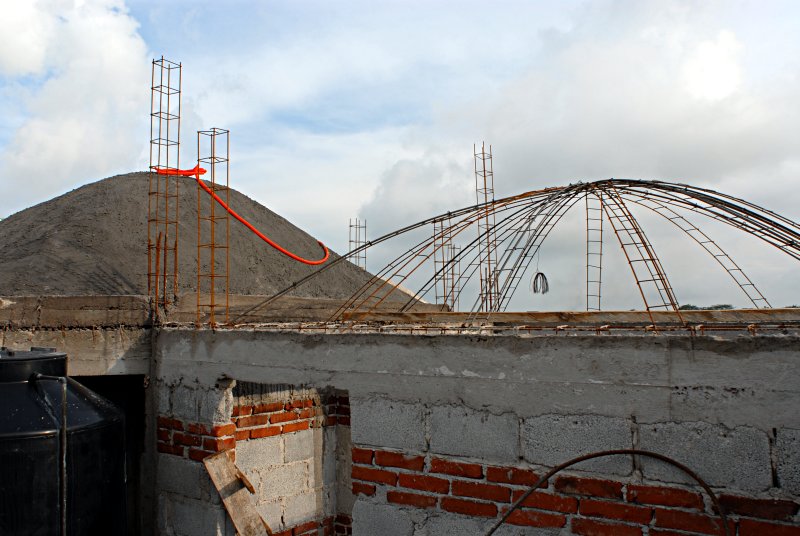 In the picture above you can see a larger vault alredy poured, and a similar vault in the process of being formed. The base of each of those is a square of about 4x4 meters, and the vault itself is under 1 meter tall. This requires no formwork at all; the rebar/mesh and concrete support themselves.

Finally, let me show you two staircases. The vaulted arches on the first one, and the funny curve on the second one, are a thin ferrocement shell. Then the steps are poured on top of the hardened shell, each one with little wood to hold the concrete. 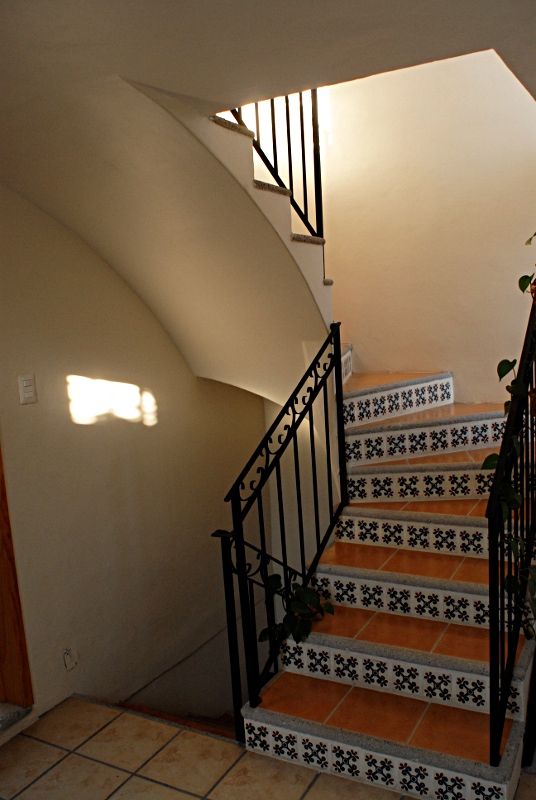 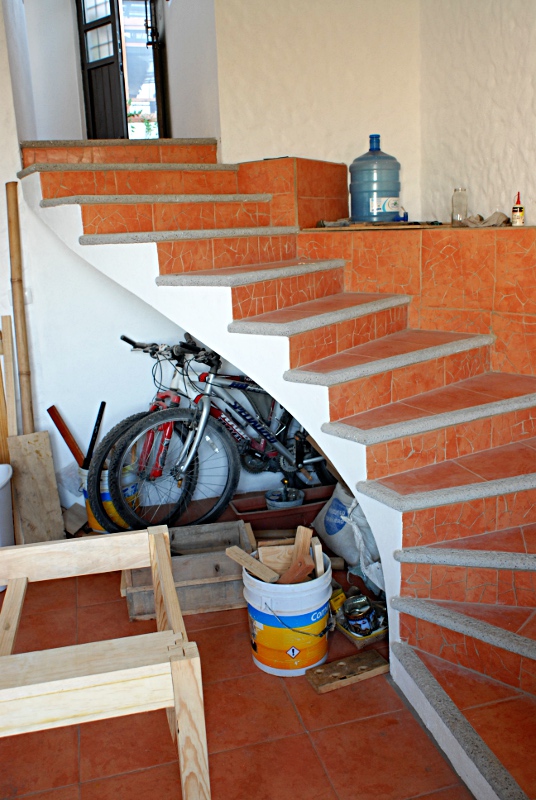 Flying Concrete is Steve Kornher's no-bullshit resource about practical construction with ferrocement. He builds vaults, staircases, and chimneys reminiscent of Antoni Gaudí's capricious forms. Last time I checked, he was experimenting with building an entire house with no "ferro" - no rebar at all, just a compression structure based on catenary curves. Based on his advice, I was able to build concrete vaults at my house.